The Spoon Mage™ loves her pineapple almost every day. Fresh pineapple is tasty,  nutritious and does wonderful things for her arthritis. This magical property comes from an anti-inflammatory enzyme called bromelain that lives within fresh pineapple. Neither dried nor canned pineapple works as well on my pain, and forget about pineapple in a pill. Go fresh for less pain and great flavor!

A pre-cut pineapple is just fine, but it is twice the price of a whole pineapple. If you have a ripe pineapple and a pineapple corer slicer, and know how to use it – go for it!

If you don’t have fancy equipment, no worries. It is easy to slice up a pineapple with a large sharp knife. With practice, you will be a pro – a pro that saves money!

How to Select a Perfect Pineapple:

As with all fruits, it should feel hefty for its size. Weight is an indicator of a high water content.

Look around the outside for soft spots or mold that may indicate a problem with how it was transported, or over-ripe fruit well on its way past deliciousness. Be careful around the pointy stems as they are quite sharp.

Give it a good sniff. A ready to eat pineapple will smell sweet.

If the pineapple looks good but is not yet ripe, only smelling faintly of pineapple, let it ripen on your kitchen counter or windowsill a few days. Give it half a turn each day. Often a nice ripe pineapple turns a pretty deep yellow such as in the picture above,, but not all do. Even the less gorgeously colored fruits can be good as gold. You’ll know it is ready when it smells as sweet as candy!

How to Prep a Pineapple:

Using a very large sharp knife, slice off the leafy top of the pineapple. This can be discarded or centered on a platter if you are having friends over for a dinner or party and would like a pretty centerpiece. Arrange the pineapple slices or chunks around the leaf stems.

In the picture to the right you can see the little dark circle in the center of the pineapple. That is the core. It is almost always removed and discarded. Some cultures love to eat it. My Thai friend enjoys the core! I do not. 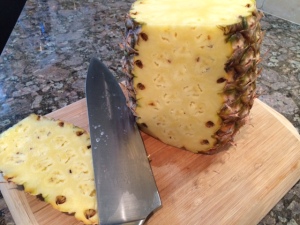 Stand it up on end and slice off the bumpy skin vertically making long slices from top to bottom all around the pineapple. If a sharp spine sticks out, cut it off.

You don’t need to get silly about cutting off all the brown bits, just cut off most of the outside.

Turn the pineapple a bit, slice of the next bit of bumpy outsides, turn, and continue in this way around the pineapple. Now is the time to go back to get the sharp or hard bits that remain.

Now it’s time to decide if you want chunks, rounds, or spears.

How to Slice Chunks:

Stand the pineapple up on its end and slice completely in half, using the core as the guide for the center.

Then cut each half in half. Now you have four long quarters that come to points in the middle.

Stand each quarter on its end and carefully slice straight down to remove the section of woody core which is now exposed at a triangular point and ready for easy removal.

In the pic to the right, the front and center strip has had its core removed. The three in back still have the core points. Slice them all off and give them to your Thai friend.

To make chunks, slice the quarters once more lengthwise. To make the chunks, cut across the strips horizontally.

Serve pineapple chunks chilled or at room temperature, or whip up a tasty Strawberry Pineapple Delight!

How to slice Rounds:

While a professional pineapple corer is nice to remove the core in one fell swoop making it easy to slice the pineapple for grilling. Perfect center circles do not make the pineapple tastier, just prettier.

Lay the skin removed whole pineapple on the side.

Using a large knife, make slices approximately 1 inch thick. Do your best to make the slice even in thickness. Even is not my best thing, but they still grill up nice. Please be careful so you don’t slice you – just slice the pineapple.

Lay a single round flat on the cutting board. Using the point of a paring or other small sharp knife, cut around the core, pushing it out if it can be easily removed.

Otherwise, just flip over the round.

Now you can see a sort of dotted line that indicates the pathway your knife took on the other side. 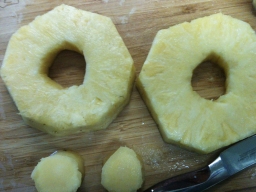 Use that as a guide and finish the cut on the other side, then pop out the core.

Your slices are now ready to grill.

If a slice broke on one side, no worries.

Pin it together with a water soaked toothpick before grilling. It will still taste delicious.

How to Slice Spears:

To grill spears instead of rounds, go ahead and quarter the pineapple as if you were going to cut chunks. Remove the core.

Now slice each quarter into two or three long lengths. the spears should at least 1 inch thick in order to be stable on the grill.

How to Grill a Pineapple:

Pineapple rounds or spears only take about 10-12 minutes on a hot grill, turning them carefully a couple times until they have beautiful char marks.

When the grill marks look like the picture on the right, the pineapple is ready to eat!

Don’t be afraid to baste the grilling pineapple with some barbecue or other sauce as the pieces grill. Get creative.

Remember that shape doesn’t matter for grilling the pineapple – just make sure the pieces are big enough so they don’t fall through the grate!

A golden pineapple all ready to slice and enjoy!