Mindfully delicious leeks are nutritious low calorie power houses that belong in the onion and garlic family of plants. Add them to any dish that would benefit from a mild oniony flavor. They work a special magic in soups and stews.

Leeks usually come bundled with twist ties or rubber bands. The bundles usually contain either two large bulbs or 3-4 smaller bulbs. It does not matter whether your leeks or large or small, they will taste the same.

What does matter is whether there is a lot of white and light green from the base of the bulb upward, because that is the part you eat! Look for leeks that have a lengthy edible area.

Don’t throw away the dark green leaves though, they are perfect for simmering a delicious stock and are a welcome addition to the compost bin.

Rinse the leeks while whole to remove external dirt. Slice off the roots and discard.

Now slice off dark green tops. They can be cut into a few small pieces and added to your compost bin or rinsed, dried, and placed in freezer bags for future stock 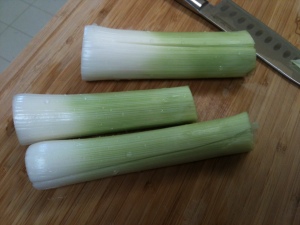 Next, make a thin slit lengthwise in each leek and discard the outer layer. This is just a thing the Spoon Mage™ likes to do as she is leery of farming additives that may cling to the exterior. If you know your leek is organic, go right ahead and use that layer in your recipe.

How thick do I slice the leeks? In whatever way the recipe calls for.

Leeks are not picky. Cut them thick, thin, leave the slices in whole circles, or cut them in half or quarters.

If you need to hide the leeks from someone in your family that thinks she hates leeks, but really only hates knowing they are there, chop them up small.

The leeks on the left were being prepped for Pinot Grigio Braised Leeks.

After slicing, separate the sections – rings or pieces – with your fingers and place them in a bowl of cool water.

Swish the leeks about vigorously in the water.

Drain them in a fine mesh colander and repeat once or twice more, until all the dirt is removed.

After the final rinse, drain thoroughly and turn the clean leeks out onto a paper or tea towel. Pat them dry before proceeding with the a saute.

Leeks are easy, tasty, and so good for a mindful meal. Enjoy!