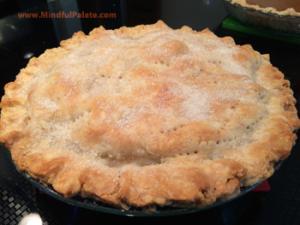 A beautiful pie just like Grandma used to make.

Click here for more details on how to make a perfect pie crust:

Use a firm apple that will have good flavor and remain crisp – not turn to mush: Golden Delicious, Fuji, or Braeburn are good crisp apples. My favorite for flavor is Fuji, but it does release more water than the others and the result is a bit of liquid in the bottom of the pan. Golden Delicious are my second favorite, then Braeburn. New apple varieties are always appearing in the store. Ask the produce manager if one of them makes a great pie apple.

Apples make better pies when fairly freshly picked. In the past that meant mainly making pies in the fall and winter. Modern transportation practices mean that the apples in your store may well have come from a climate that grows apples in an alternate season from yours.

Talk to the produce manager about where the apples are from. If she does not know, then try what I do for most fruits – if it weighs heavy for its size, it has more liquid or is more dense, a desirable thing. Dense apples make the best pies. But, vanilla ice cream provides a nice cloaking for grainy or mushy apple slices.

Stir together the flour and salt. Cut the shortening into the flour until the texture is evenly smaller than pea sized lumps. Stir the egg and vinegar together and add to the flour. Add cold water 1 tablespoon at a time, just until the dough holds together. Form two balls, and roll out into two crusts.

In a small bowl, combine the sugar and cinnamon.

Peel and core the apples. Slice thinly, placing them in a large bowl. Work quickly to prevent browning.

Cover the apples with the cinnamon sugar and stir gently to combine.

Lay the apples evenly inside the prepared crust sitting in the pie pan.

Sprinkle pieces of butter over the apples.

Top with second pastry circle. Trim excess if necessary. Crimp the edges with your fingers to form pretty crusty ridges all around the pie pan.

Prick the top of the pastry with a fork to make air holes. This will let the apples stay firm instead of steaming into mush. If you like, make pretty designs with the air holes.

Place in the oven and bake for 10 minutes.

Brush pie with a little milk and sprinkle with sugar.

Return to the oven and bake 10 minutes more or until the crust is a beautiful brown.

Remove the pie from the oven and set to rest at least 30 minutes. Serve all by itself or with a small scoop of vanilla ice cream.